The Final Watch is a Single Player Horror game made in Unreal Engine 4 using assets bought from the Unreal Marketplace.

I was already quite experienced with the engine when I started this project.
I did however want to improve my skills using the Blueprint system in Unreal Engine 4.
Something I had only touched briefly before.
To maximize the time I could spend on learning how to make Blueprints.
I bought a few asset packs on the Unreal Marketplace to make the game visually appealing.

At least a week of the development time was spent on watching youtube tutorials to learn things I needed to fully realize my vision of this game.
Through tutorials I was able to understand how to make different blueprints interact with each other.
I needed this in order to connect my key blueprints to locked doors, making it possible to use keys to open doors within the level.

At the beginning of the project I wrote a small story for the game, drawing inspiration from horror themed games such as 'Amnesia' and 'Silent Hill'.
But also classic horror films such as Halloween, Scream and The Shining.

The Flashlight Blueprint is of great importance as it allowed me to make the level quite dark which is great for a horror game.

The way it works is that I have attached a spotlight to the player character which will be toggled on and off by pressing 'f'.
If the game is in 'timeout' mode the flashlight will not work.

I used a custom Light Function Material I bought on the Unreal Marketplace for the flashlight which makes it look authentic.

The Door blueprint is the most important blueprints I made for the game.

The door can be opened and closed from both sides, it's opening direction is based on the characters location towards the door.

Doors are opened and closed by pressing the action button 'e'.

The second part of the blueprint starts when the player presses the action button 'e'.

If the door is open, it will be checked which way it is opened and then close accordingly.
If the door is closed, it will check the current location of the player and open accordingly (the door opens in, not out.)

When either of the actions are completed, the door open state will be set accordingly.

Story
The story is centered around Police Officer Jack Torrence who is called out to investigate a possible murder in an old hotel.

As the player progresses through the game the story takes a turn as you get hints that the main character might not actually be alive.

The player will encounter several odd events and murders before meeting his inevitable demise.

During the pre-production part of development I also made a quick topdown of the layout.
Originally it had a basement level also but I quickly decided to cut that part out.
In doing so I was able to polish the level to a higher standard than I would have been able to otherwise.

The blueprint shows the playable area of the game.
There are more rooms but they are closed off by locked doors.

Due to the small size of the level I was able to use plenty of dynamic lights and shadows without affecting the frames per second.

Due to the limitation of 10 weeks I had to cut out parts of the game I had originally planned to include.

I reduced the intro of the game by quite a bit.
My initial plan was to have a cutscene inside a car driving towards the location but I quickly realized that this would be too much work.
Instead I replaced it with a blackscreen where the main character receives the mission.

Initially I also wanted the level to be brighter lit connecting to an event where the electricity is cut and the player must find a way to get it back up.
As this would require me to create a basement level I decided against this idea.
By cutting this out I also gained more importance to the flashlight due to the game being less lit.

Finally I wanted the antagonist of the game to have a 3D model with animations which would have increased the horror element.

Unfortunately this would have consumed way too much time and effort and would probably not have looked good enough to be on par with the visuals of the game.
Instead I changed the story a bit so that the main character would already be dead at the start of the game creating a twist ending where the player realizes this fact.
However due to the time limit I was unable to incorporate this as well as I wanted to.

The Thunder blueprint was the first blueprint I made for the game.
There are four different spawns for the Thunder effect within the game.

I used the 'Multigate' node to trigger random effects at random times.
The blueprint starts off with a random delay for when the thunder should trigger.

It will then activate one of three emitters (which have different visuals,)
activate a directional light for the flash effect of the lightning and move onto another random delay.
Which will then trigger one out of 8 different lightning strike sound effects.

The end node of the blueprint is connected to the start node which makes it a loop and will run endlessly. 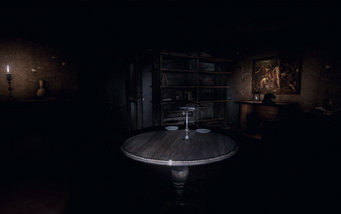